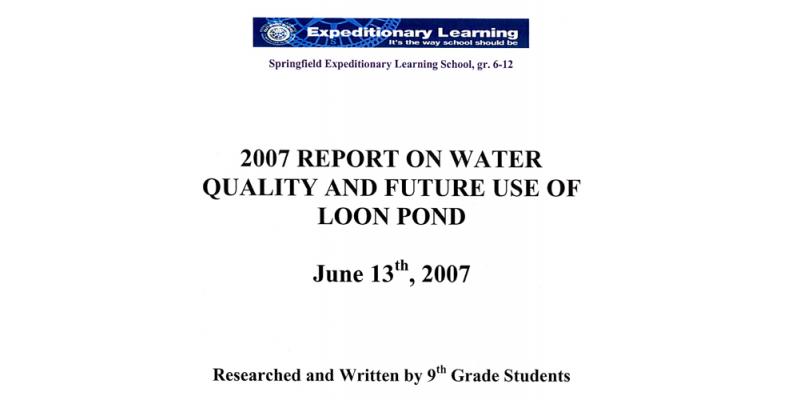 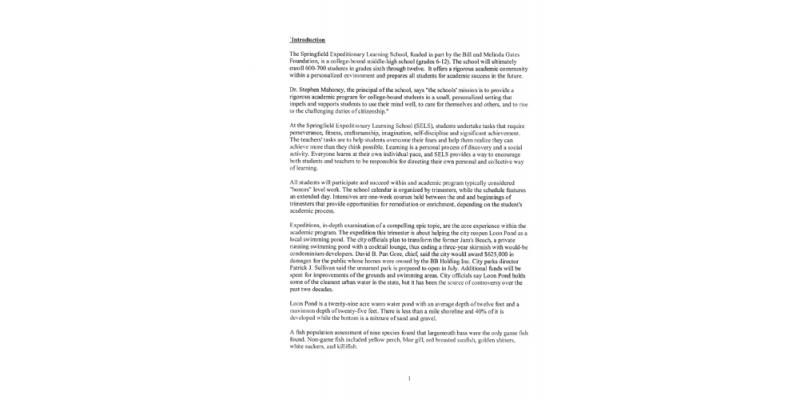 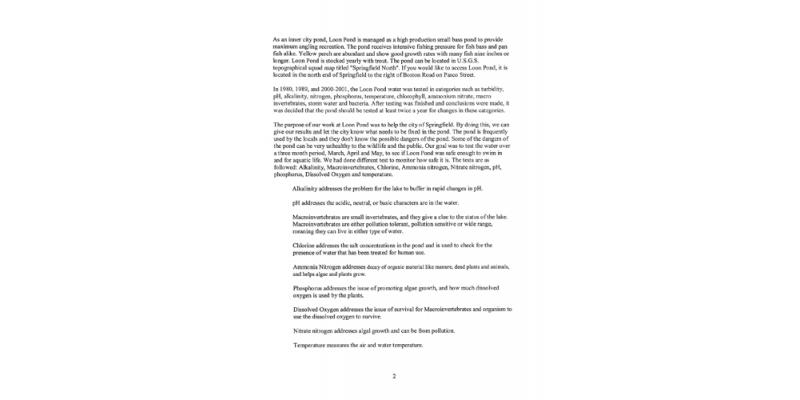 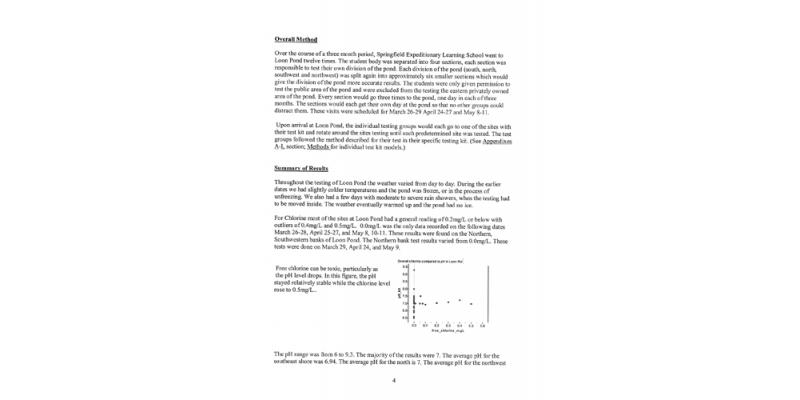 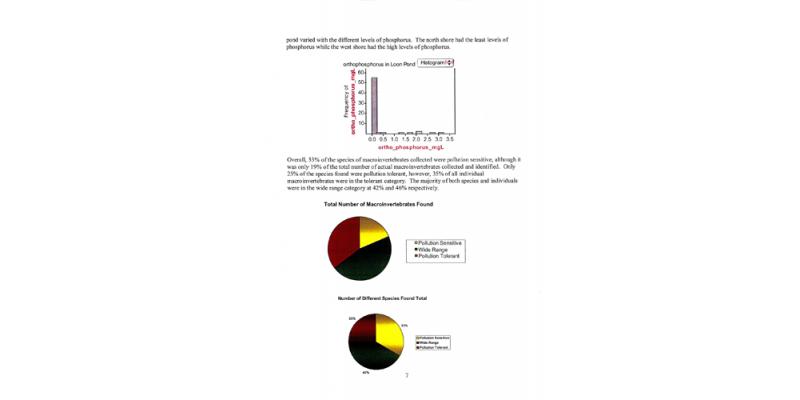 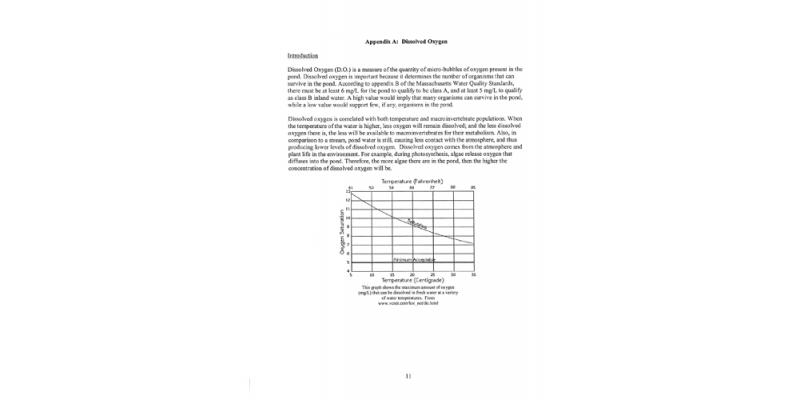 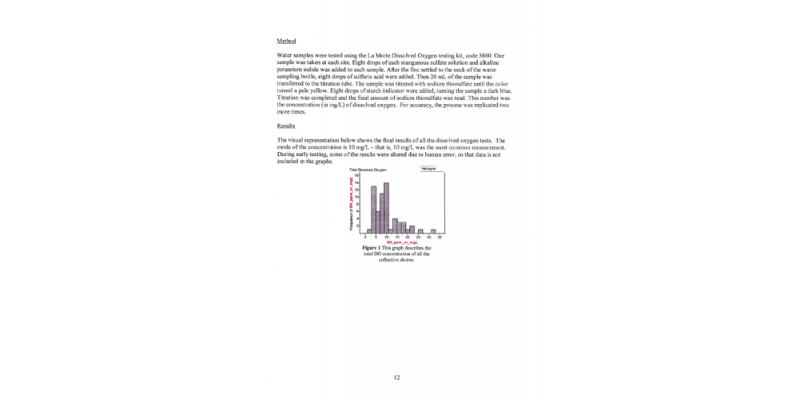 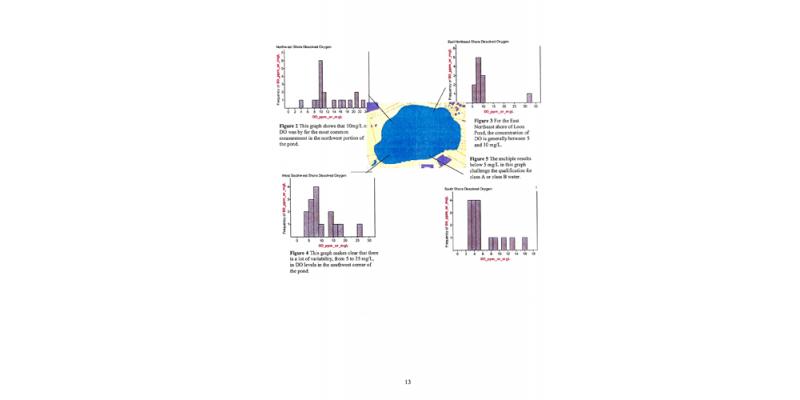 9th grade students from the Renaissance Charter School in Springfield, Massachusetts, prepared this report on the quality of water and future use of Loon Pond, an urban pond near the school.

This project began through a conversation between the students’ biology teacher and the City of Springfield. The teacher approached city officials to find out if there was a project, with a genuine need, on which the students could work. At the time, the city was considering cleaning up and turning Loon Pond into a swimming area, but they had not yet done a full analysis of water quality. City officials came to the school and did a presentation to the 9th graders, in which they enlisted the students’ help. Students, new to the idea of being real researchers, at first thought, “How can we possibly help?” It was the first year of the school, and many students in the class came in without grade-level academic skills, nor histories of academic success.

Students did multiple rounds of fieldwork at the pond, during which they repeatedly performed nine tests of water quality. Tests were done both to check the quality of water for human purposes (i.e. swimming) and for the health of the aquatic life.

Because there were four classes of 9th grade students, and the teacher wanted to make sure that all students had experience with each of the water quality tests and all of the subsequent required learning, each class was made responsible for a quadrant of the pond. This also allowed classes to meet, share data and compare results from the across quadrants.

During their fieldwork, which spanned three months, students also engaged in cleaning a tremendous amount of trash out of the pond and the surrounding area. The trash removed included large items such as old appliances; a local television news story showed students explaining their research as their peers, in the background, are carrying discarded, soggy furniture up the bank.

Students prepared a report, which was presented to the city officials who had originally asked them for their help. In the report, students provide detailed descriptions of each of the tests, their results and recommendations based on their findings.

This learning expedition was conducted during the first year of the school. Students realized that they could do meaningful science, and their original research and service helped shape a culture of learning at this school.

Soon after engaging in this project, students took a standardized biology test on which they did surprisingly well compared to district counterparts. In preparation for this test, students studied for the test with a whole new resolve in part because of their success with the water quality project. Doing well on this test helped shape students’ academic self-image.