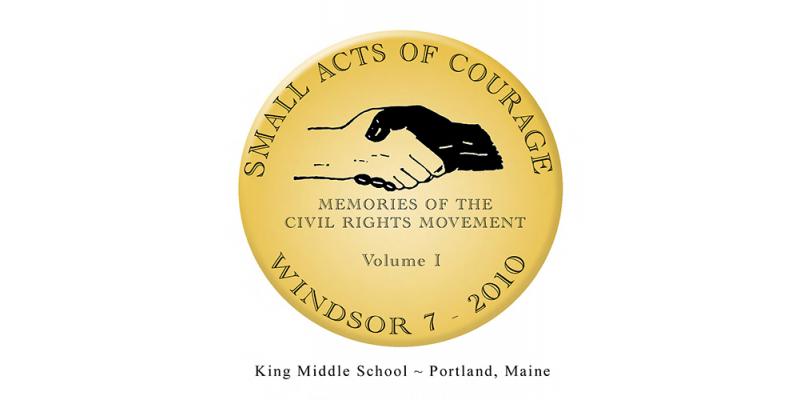 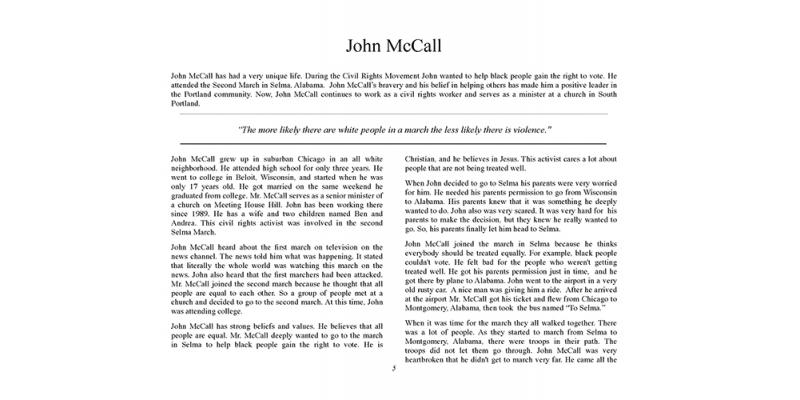 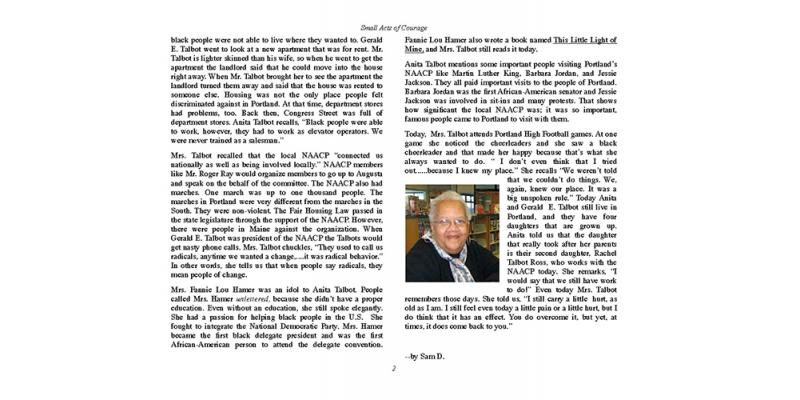 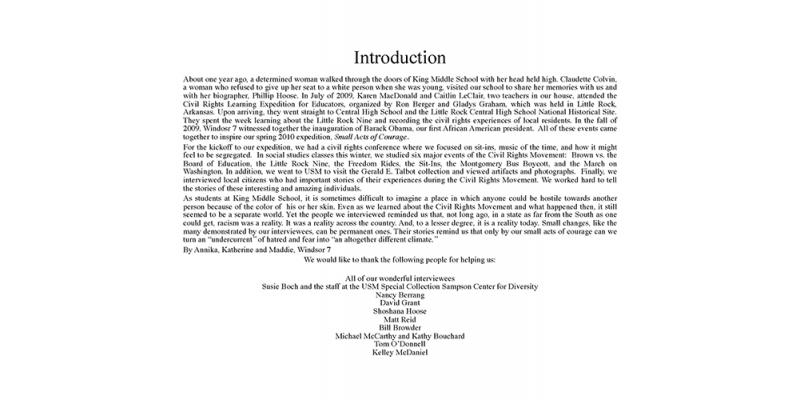 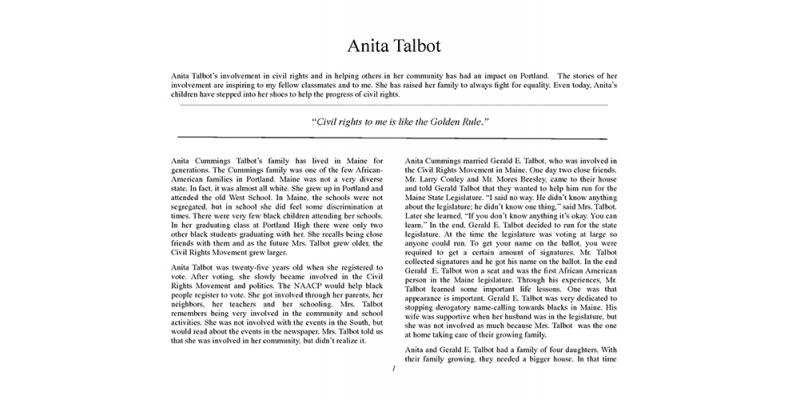 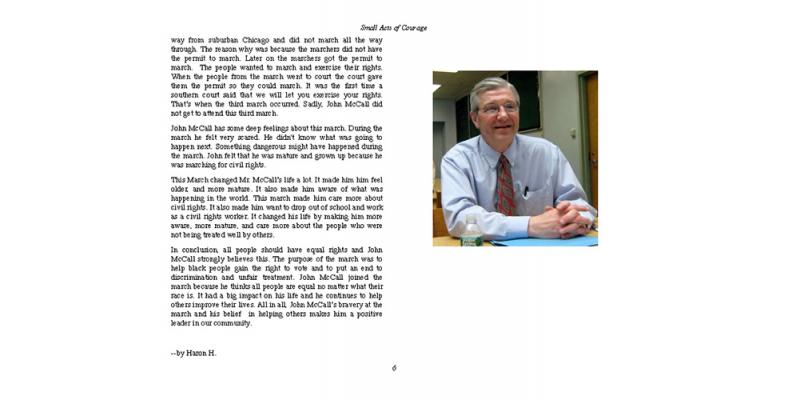 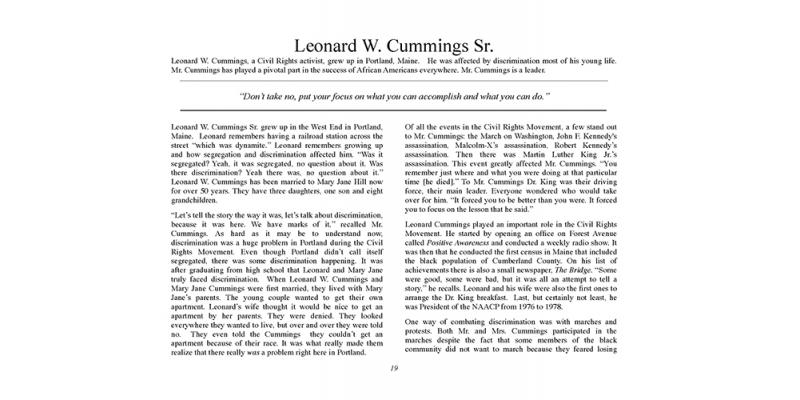 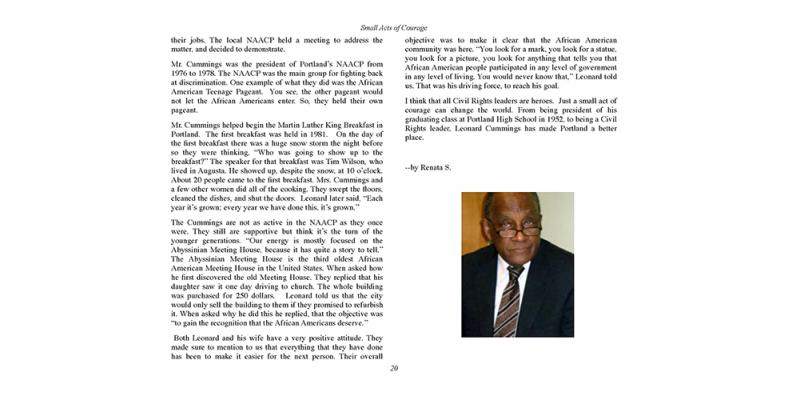 Seventh grade students at King Middle School in Portland, Maine created a set of four books of interviews with unsung local civil rights heroes as part of a learning expedition on civil rights. The project involved 82 students from diverse backgrounds. Their teachers (Social Studies and ELA) had attended the Expeditionary Learning Institute “Civil Rights” in Little Rock, Arkansas the previous summer, and had themselves engaged in meeting and interviewing local heroes of the civil rights movement and created a book to honor them. The teachers replicated, deepened and localized this study and this project with their own students.

Students studied the history of the Civil Rights Era from multiple perspectives:

The teachers sent an initial letter home to parents to explain that controversial issues would be addressed during the study, and asking for their understanding and help. Because the school has a diverse population – 32 languages spoken – there was much discussion during the study of how issues of race and background affect the students in their own lives. When videos – such as “Eyes on the Prize” and readings were used, classes paused frequently to discuss connections and implications in their own lives.

Students were involved in a case study of civil rights in Portland, researching both secondary source and primary source materials. They had access to the personal primary source library materials of a local hero who was the founding member of the Portland chapter of the NAACP and the first African-American legislator in Maine.

Students rehearsed interview courtesies and strategies for a week before embarking on the actual interviews of 22 local subjects. They also read and critiqued the written interviews done by their teachers, and other teachers, from the EL summer institute in Little Rock. In teams of four, students interview local civil rights heroes, using a tape recorder as well as notebooks. Each student then created a personal account of the civil rights story of his or her subject. The student work went through many drafts – often ten to fifteen – with critique from peers, teachers and the interview subjects themselves. The final drafts were published as a set of four books; each book contains the interview and a photo of the same 22 heroes done by a different student.

The books were shared in an exhibition and presentation at the school, with period music and displays, attended by the heroes and their families, school members and local press. All 82 students formally presented their work on stage before presenting the books to the heroes.

Following the presentation, students became involved in a project to sell the books to raise funds for the restoration of a local historical Black church.

In a visit to the school in 2010, U.S. Secretary of Education Arne Duncan spoke with the students involved in this project and took copies of the book with him back to Washington.