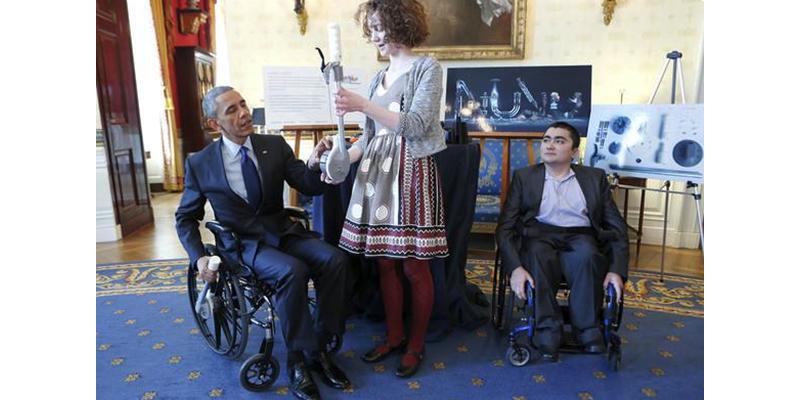 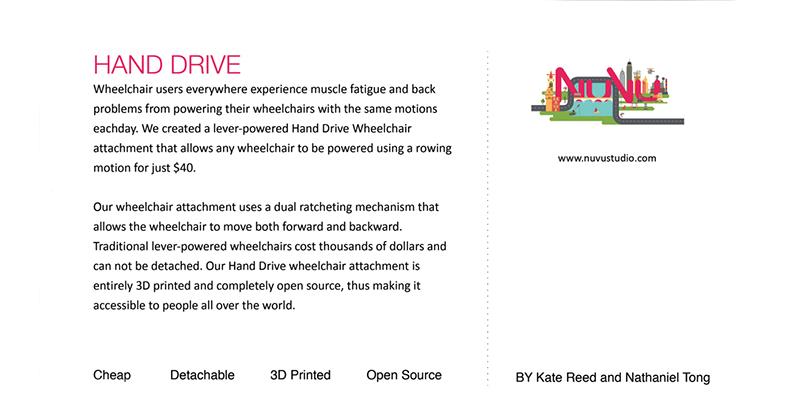 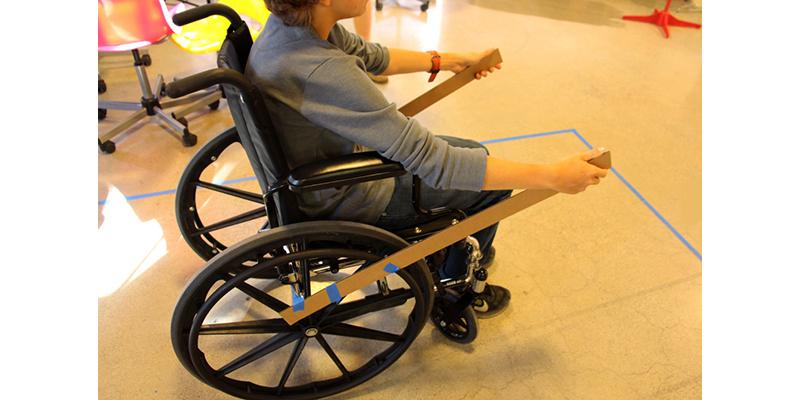 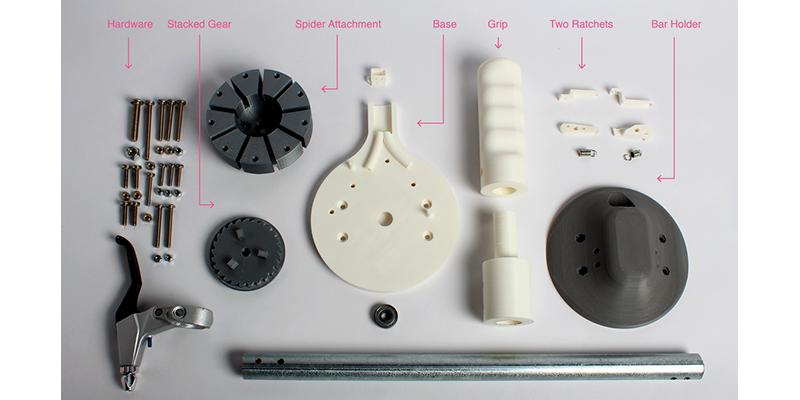 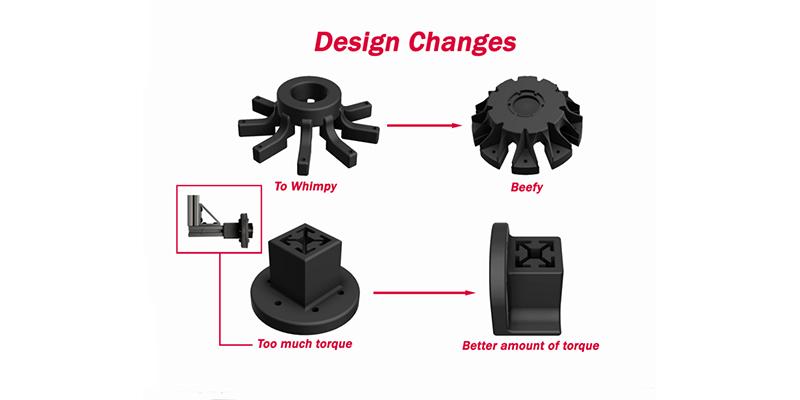 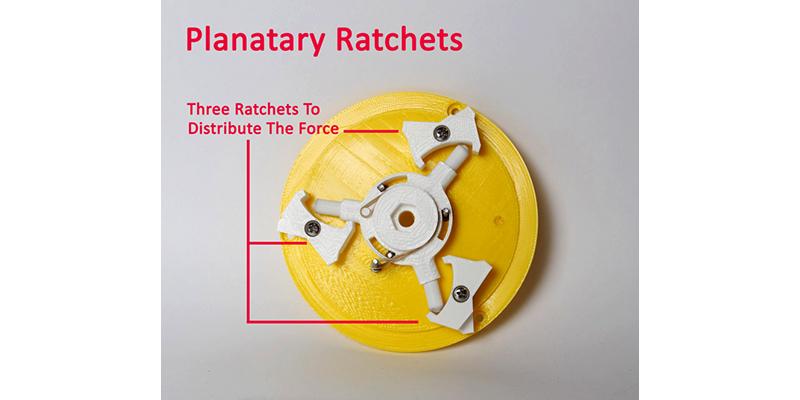 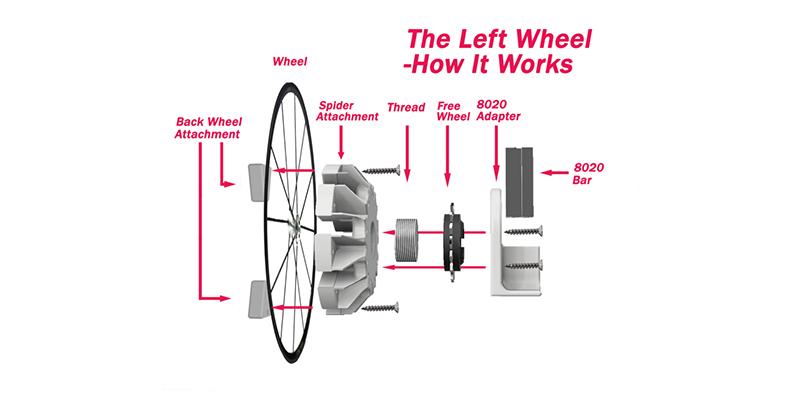 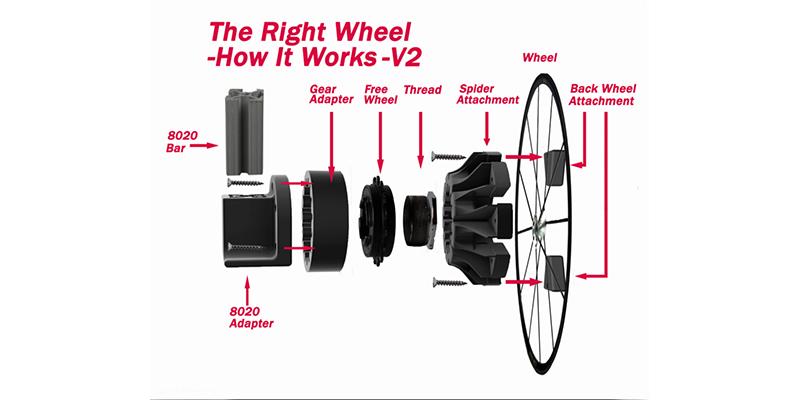 As part of the studio, “Hacking Wheelchairs for Urbanity” NuVu students were tasked with improving the wheelchair by accessorizing it as opposed to redesigning the chair itself. Part of this challenge was also affordability, as many current technologies are costly.

Students Kate Reed, Nathaniel Tong and Stefano Pagani chose to focus on wheelchair speed through the use of a low-cost lightweight lever that could snap onto the free wheel of a chair. This accessory would allow users to make a rowing motion instead of a wheeling motion to make their chair move faster and to exercise different muscles.

Students started their process with a collection of bike parts, taking wheels and gears apart to see what they could borrow and recycle. After tinkering with the bike parts, they realized that they would need to create their own mechanism in order to power both sides of the chair (the left and right wheels are flipped mechanically) and allow backward movement.

In their next iteration, students 3D-printed the entire mechanism with dual ratcheting and a stacked gear system. When they encountered strength issues with this version they created “a planetary ratchet to displace the forces over three ratchets instead of just one.”

On the final day of the studio, students realized that they had accidentally made two different mechanisms for the right side of the chair. “Although this was unplanned and would be considered a mistake it was good that we had done it. We had come up with two completely different ways to do the same thing and through doing this we found that one way was much better,” students described in their reflection. They edited the parts for the left side of the chair and the resulting product worked for both the left and right sides of the chair by the end of the studio.

In addition to ease of use, the hand drive is a fraction of the price of existing levers, which run from $2,000-$10,000. Student Kate Reed explained, “Our attachment is almost entirely 3D printable, it’s completely open source, and costs only $40 to make, which is essentially less than 1% of the cost of its competitors on the market.”

As the studio came to an end, the team was invited to show their invention to the White House Science Fair. President Obama came to their station and tested the device and was impressed by the concept.

At NuVu, an innovation school in Cambridge, MA, middle and high school students learn in an open and flexible space that is more akin to an architecture studio than a classroom. Some students attend NuVu for a two-week intensive and for others it is their full-time high school.

Instead of one-hour classes and separate subjects, students engage in solving a problem through multi-disciplinary learning, all day, for two weeks. Groups of twelve students collaborate on the creative process, with expert guidance from two coaches who have expertise in a related field. Throughout the process, students conduct precedent research, engage in brainstorming, render drafts of their ideas, create prototypes and write and reflect on their findings and processes. Their work is captured in a portfolio along with documentation of the final products they debut at the end of each studio session. These portfolios are publically viewable on NuVu’s website.